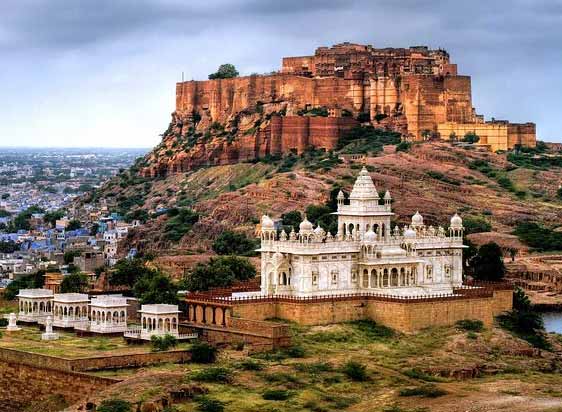 Discover two of the most beautiful towns in Rajasthan, which are Jaipur “The Pink City” and Jodhpur “The Blue City”. A famous and renowned tourist destination, Jaipur is a part of the Golden Triangle with Delhi and Agra. Jaipur is a proud home of two UNESCO heritage sites: The Jantar Mantar and the Amber Fort. Jodhpur was the second largest city of Rajasthan after Jaipur was the previous seat of a princely state whose capital was Marwar. The city is also located near the geographical center of Rajasthan. The Jaipur Jodhpur 4 Days gives you a glimpse into the royal lives of the past. Book 4 Days Jaipur Jodhpur Tour Package with us and get the best deals on this customizable tour package.

Day 1: Jaipur Arrival
On your arrival at Jaipur Airport or Railway Station, you will be received by our tour representative to transfer to the pre-booked hotel. Take time to freshen up and relax in the hotel room.
Later proceed for a guided Jaipur City Tour with a visit to the famous Birla Mandir, Moti Doongri Ganesh Temple, and Albert Hall Museum. Don’t miss out on the extraordinary shopping experience from the colorful and bustling Jaipur Bazaars. Shop for traditional artefacts like handicrafts, textiles, jewelry, and more. After a half-day sightseeing tour, return to the hotel for dinner and an overnight stay.

Day 2: Jaipur Sightseeing Tour
After breakfast, get ready to explore the beautiful capital city of Rajasthan, Jaipur. First, you will take you to the magnificent Amber Fort which is featured as the UNESCO’s World Heritage Site in India. Then, visit the Jal Mahal which is also known as the Water Palace that floats on the Man Sagar Lake. Next, you may pay a visit to Jantar Mantar built in the 8th century to compile astronomical tables. The magnificent City Palace is made of using pink and red sandstone architectural marvel showcasing the blend of Rajput and Mughal structure. Afterward, return to the hotel for an overnight stay.

Day 3: Jaipur to Jodhpur Transfer & Sightseeing
On the 3rd day, proceed towards Jodhpur after breakfast. Jodhpur is the second-largest city of Rajasthan that is famously known as “The Blue City” and “The Sun City”. From Jaipur, Jodhpur is around 284 Km away from Jaipur. On arrival, you may start on the sightseeing tour wherein you will explore the famous Mehrangarh Fort which is known to offer the most spectacular views of the blue city. The fort also houses various palaces with expansive courtyards and beautiful interiors. The famous Umaid Bhawan Palace is a historical museum located here that is known to house various culturally significant pieces of art and history. Also, visit the famous Jaswant Thada, a white marble structure built-in memory of Maharaja Jaswant Singh and is located close to the fort. After an interesting sightseeing tour, you will return to the hotel for an overnight stay.

Day 4: Departure from Jodhpur
On the last day of the Jaipur Jodhpur 4 Days Tour Package, check out from the hotel room in Jaipur and you will be transferred to Jodhpur airport/ Railway Station for your onward journey.