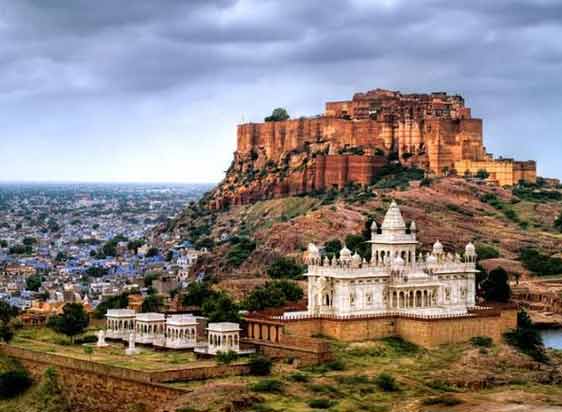 Tour Overview:
The second-largest city of Rajasthan, Jodhpur is one of the popular tourist destinations among the local and international tourists with Jodhpur 3 Days Tour Itinerary. Travellers who visit Jodhpur may not realize why Jodhpur is regarded as the “Blue City of Rajasthan” in India. There is a captivating past realized why Jodhpur is regarded as the “Blue City” in India. By spending 2 nights 3 days Jodhpur Tour, you will witness the marvel of the blue houses painted for signifying the place was occupied by Brahmins. Book customizable Jodhpur Tour Package 2 Nights 3 Days with us and get the best deals on it.

Begin 3 days Jodhpur Tour by reaching the land of Blue City. Meet and greet the tour representative who would escort you to the hotel. The second-largest city of Rajasthan, Jodhpur is regarded as the Sun City along with Blue City because the people of Jodhpur enjoy a sunny and bright climate. Check in to the hotel room and have a few hours of rest before heading out to explore the city.
Later, get ready, and visit the mighty Mehrangarh Fort that takes pride to be one of the largest forts in India. The fortress is called the Citadel of the Sun. Witness the glory and valor of the gigantic forts in India that speak stories of bravery, sacrifice, architecture, and finesse of the Princes and Kings of Jodhpur. Then, you can explore the areas nearby and have a great time. Afterward, return to the hotel to have some rest and overnight stay in Jodhpur.

After you wake up early in the morning, enjoy the beautiful sunrise view of Jodhpur which is incredibly famous worldwide. Enjoy breakfast and then get ready to proceed for the expedition. On the 2nd day, you will have a lot of places to visit on the Jodhpur Sightseeing Tour that include -
Jaswant Thada - A memorial site of Maharaja Jaswant Singh, Jaswant Thada is located close to Mehrangarh Fort. This is a beautiful edifice of marble that leaves everyone in awe. Its impressive intricate carvings, multi-level garden, intricately carved gazebos, and a pond, are its major attractions.
Umaid Bhawan Palace - The construction of Umaid Bhawan Palace was dated back to 1929 and 1943. The palace is situated on the highest point of the city. It is one of the largest private residences in the world that boasts a combination of Indian and European styles of architecture.
Mandore Garden - Mandore’s belongings to the 6th century were Marwar’s capital before Jodhpur. The lush gardens here draw tourists in great numbers and also houses a government museum, a Hall of Heroes, and a temple.
After sightseeing at these tourist sites, return to the hotel to have some rest and overnight stay in Jodhpur.

After waking up to your last day in Jodhpur, you will be provided with breakfast and then pack your things to depart. The next thing you need will leave Jodhpur via Railway Station.