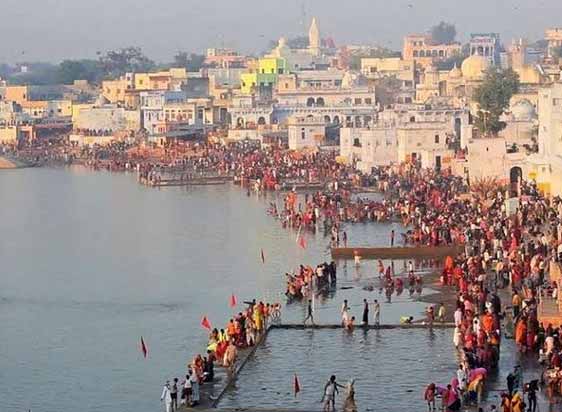 Delightful Jaipur Ajmer Pushkar 4 Days Tour in Rajasthan and explore the majestic beauty of these spiritual and heritage cities of the state. The tour gives you a chance to explore the iconic historic landmarks including forts, palaces, temples, observatories, museums, and more. Relish the Rajasthani traditional cuisines and dance to the tunes of folk music in an ethnic village. Discover the famous pilgrimage cities of Ajmer and Pushkar on a day excursion from Jaipur. Book 3 nights 4 days Jaipur Ajmer Pushkar Tour Package with us and get the best deals on it. Customization of this package is available, so you can tailor-make the tour according to your interests and comforts.

Day 1: Jaipur Arrival
As you reach Jaipur Railway Station or Airport, you will be transferred to your pre-booked hotel to check-in to the room for taking a rest. In the evening, get ready to explore the famous tourist attractions like -

Then, you will be back at the hotel in Jaipur followed by an overnight stay.

Day 2: Jaipur Sightseeing Tour
On the second day of this tour, you will be having breakfast and start exploring Jaipur full-day tour. You will be visiting these famous tourist sites -
Amber Fort and Palace is a majestic structure with its maze-like passages and serpentine staircases is an architectural masterpiece in the city.
Jal Mahal or Water Palace sit prettily in the centre of the Man Sagar Lake on the outskirts of Jaipur. The splendid and tranquil Jal Mahal is a masterful creation bordered by the Nahargarh Hills.
City Palace is one of the most popular tourist attractions in the walled city of Jaipur. The royal palace was built by Maharaja Sawai Jai Singh during the years 1729 to 1732.
Jantar Mantar is the largest stone astronomical observatory in the world. Owing to its rich cultural, heritage, and scientific value, Jantar Mantar is also featured on UNESCO’s list of World Heritage Site.
Albert Hall Museum is the oldest museum in Rajasthan which was built in 1876 initially envisioned to be a concert hall and resembles the finest architecture of the Albert Hall Museum in London.
In the evening, return to the hotel for an overnight stay in Jaipur.

Day 3: Ajmer Pushkar Day Tour
After breakfast on the third day, you will start off your day excursion to Ajmer and Pushkar. Both of these are the most popular for all globetrotters from all across the globe. You will be heading to historical sites like -

After worshipping ancient religious sites, drive back to the hotel in Jaipur followed by an overnight stay.

Day 4: Departure from Jaipur
Post breakfast in Jaipur, you will be checked out of the hotel and then you will be transferred to Jaipur Railway Station or Airport for your onward journey.