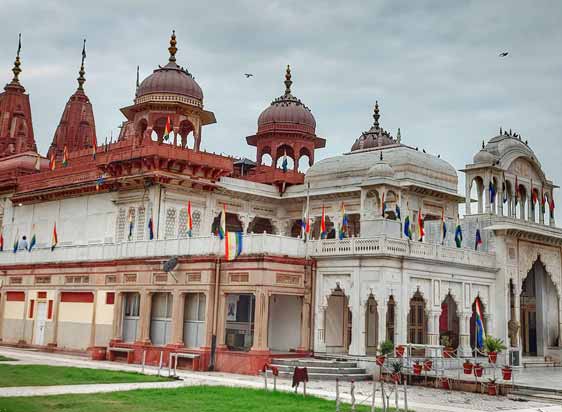 Jaipur to Shri Mahavirji Day Tour is one of the best spiritual tours offered by Jaipur Taxi Services. We have exclusively designed this holiday tour for spiritual lovers to enjoy a day trip to Shri Mahavirji in the Karauli district of Rajasthan. Travellers or pilgrims can choose to travel to Mahavirji Temple to find peace of mind. This is the most popular Jain temple in Rajasthan where you can worship the 24th Jain Thirthankara, Mahavira Bhagwan. The tour includes a car rental in Jaipur for a day trip to Mahavirji Temple in Rajasthan. The following tour package is customizable, we can make changes according to your interests and preferences.

Meet the representative at the pickup point –

Jaipur Mahavirji Temple Day Tour will begin with your pick up from a location in Jaipur, be it a hotel/home/or railway station. Our tour representative will meet and greet you at a pre-defined location and time. It is suggested to begin a journey in the morning early so that you can worship at the temple and return to the city comfortably.

Shri Mahavir ji temple lies in the Karauli district of Rajasthan. It was earlier known as Chandanpur and became famous as a Jain religious site after an ancient idol of Mahaveer. It was then renamed Shri Mahavir ji Temple. The supreme deity here is the last of the 24th Jain Tirthankara, Mahavira Bhagawan. It was established more than 200 years ago which beholds special significance for those who follow the tradition of Digambar Jain. Every year in Mahavir Jayanti there is a festival celebrated in this temple, lasting five days in the month of April. It is the time of the year when millions of devotee’s flock here from all over the world.

History of the temple –

The principal deity of Lord Mahavira in India is established in this temple which was originally found on a mound where it miraculously appeared. The local villagers excavated the idol only because they noticed a cow (Kaamduhadhenu) pouring his milk on the mount every day. When the villagers became curious about it, they excavated the mound and were surprised at the appearance of the idol of Lord Mahavira. Then people started offering prayers to this deity, and a temple was constructed for the idol of Shri Amar Chand Bilala of Jaipur.

The main temple is covered with an umbrella made of marble and is adorned with images representing the feet of the Lord. The temple features an imposing and attractive architectural design. It is surrounded by many Dharamshalas. The idol that bestows devotees’ miracles is installed in the main shrine.

After worshipping at the temple, get transferred to the city again. On the way, take a halt for refreshments. The tour will conclude with a drop to a predefined place in Jaipur. The following spiritual same-day trip of the Jaipur Taxi Service is customizable, we can tailor-make our services for your satisfaction and joy.