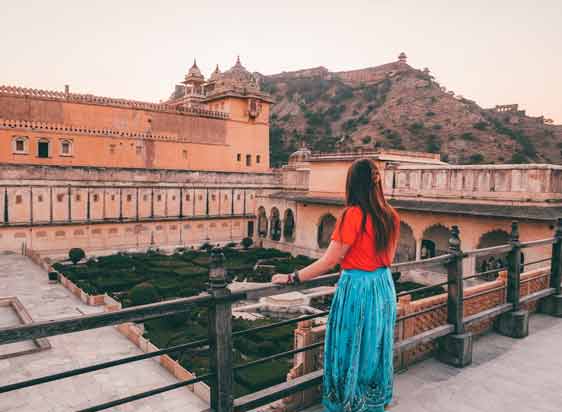 Tour Overview:
Jaipur is a famous pink city of Rajasthan which is also the capital city of the royal state. Every Jaipur Sightseeing Tour remains incomplete without exploring the mighty forts, palaces, and museums. If you are someone planning a holiday trip to Jaipur and have a limited period, then Jaipur One Day Tour is the best for you to discover Jaipur in 1 day. Embarking on the beautiful journey to the Pink City wherein you will be exploring the city in the comfort of cars.

Birla Mandir - The most famous temple and a highly-regarded pilgrimage site for the Hindus, Birla Mandir in Jaipur is a marvelous temple. Its impressive structure speaks of beauty in every possible way. The religious site was built using marble which is explored by thousands of devotees every day. This temple is surrounded by lush green gardens on all sides.
Albert Hall Museum - An aphrodisiac feels of cultures and heritage, all encompass the museum in Jaipur. Albert Hall Museum is famously known for its somber collection of artefacts and a history as rich as the state itself. The museum holds to be a retreat to yearning eyes. With absolutely stunning architecture and intricate design, this museum is the pride of Jaipur in every way.
Hawa Mahal - Famously known as the Palace of Winds, Hawa Mahal in Jaipur is considered one of the most important architectural jewels of the city. A five-storey structure looks like a honeycomb of a beehive and is always windy inside, owing to the 953 small windows and jharokhas. The palace is amazing ventilation that the palace enjoys the reason why it was named such.
City Palace - Jaipur is one such destination that transports you back to the Rajput era, City Palace is an architectural delight right in the heart of the city. The city palace was used to be the home for the royal family of Jaipur but later it was divided into two parts. One which contains few courtyards and museums, the other where the royal family still resides.
Jantar Mantar - The essence of many a wanderlust over the years, Jantar Mantar in Jaipur is an open-air astronomical observatory. This is a UNESCO World Heritage Site which is one of the rare and timeless places of attraction in Jaipur and the world. With an illuminating past that predates modern civilization which was far ahead of its time and showcased the ancient ways of reading stars and skies.
Optional:
Other than these, you can also plan a visit to these tourist sites Jaigarh Fort, Amber Fort, Nahargarh Fort, and Jal Mahal.

Amber Fort - One of the most famous tourist sites in Jaipur, Amber Fort and Palace is an extensive palace complex. This has been built with pale yellow and pink sandstone with a white marble structure. The fort is divided into four main sections that are graced with their courtyard.
Jal Mahal - A water palace floats on the picturesque Man Sagar Lake, Jal Mahal in Jaipur is a spectacular structure that seems to be floating on the lake’s surface. It is an architectural marvel which is an embodiment of the engineering prowess of the Rajput era.
Hawa Mahal - Also known as the “Palace of Breeze”, Hawa Mahal was built in 1799 as an extension to the Royal City Palace of Jaipur. The palace allows the royal ladies to observe the outside proceedings without being seen from outside.
City Palace - The iconic royal palace lies in the heart of the pink city. City Palace Jaipur was built by Sawai Jai Singh who headed the Kachwaha Rajput Clan and holds the credit of being the founder of Jaipur.
Jantar Mantar - Built in the early 18th century by Maharaja Sawai Jai Singh II, Jantar Mantar is a conglomeration of fixed stones and very large structures. Each has its specific usage and the main reason for it being built was because the Maharaja was fascinated with celestial objects and movements of different bodies of the sky.
Albert Hall Museum - The pride of Jaipur, Albert Hall Museum truly represents the Indo-Saracenic style of architecture and design. This revival style was appreciated by travelers and visitors from all across the globe.
Birla Temple - Originally known as Lakshmi Narayan Temple, Birla Temple is a popular Hindu Temple located in Jaipur and is serve as an iconic pilgrimage site in Jaipur.