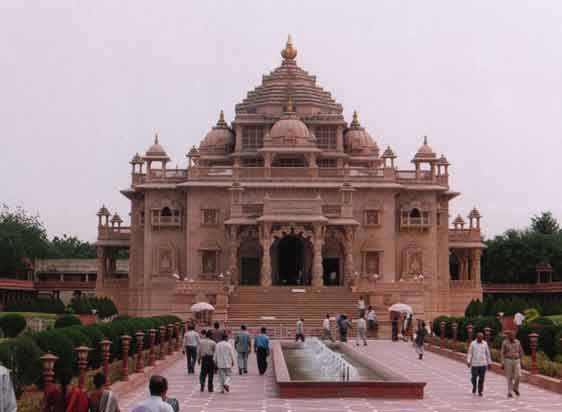 Jaipur has always been known widely for its heritage beauty, palaces, and Maharajas. Instead of that, you know that the heritage city is quite famous for its religious, enrichment, and temples with beautiful tourist sites. Every year, thousands of tourists visit Jaipur to discover its historic architectural jewels which also include the ancient temples. The capital city of Rajasthan, Jaipur is a beautiful Pink City in India that reflects the heritage warmth of its rich cultures and traditions. If you are having faith in spirituality, then you must take a visit to these 10 most popular temples to visit in the Jaipur Tour Package.

10 Most Famous Temples in Jaipur

Near Nahargarh Fort and Jaigarh Fort, Garh Ganesh is among the best temples in Jaipur. The temple rests at the hilltop, where the holy shrine is dedicated to Lord Ganesha. There is a common belief that Lord Ganesha is worshipped here as a child “Vigra Purusha Kriti”, who, unlike Ganesha, does not have any trunk. Dated back to the 19th century, the temple was built by Maharaja Sawai Man Singh I.

One of the popular historic temples in Jaipur, Shila Devi Mandir is known for its unique features and rich historical facts. The popular Hindu temple is based on the legendary fact that Raja Man Singh I of Amber was defeated by King Kedar. He sought the blessings of Mata Shila Devi. The goddess ordered the king to bring the statue and build a temple. The temple is located inside Jaipur’s most prominent Amber Fort.

If you are on a Jaipur Sightseeing Tour, then there is no way to miss out on the Galtaji Temple. Famously known as the Rat Temple of Jaipur, the temple hosts the holy shrine of Saint Rishi Galav. It is believed that sparkling some waters from the particular religious tank can help the devotees attain salvation and find the path towards moksha. It is commonly believed that taking a dip in the holy water of the upper and lower kinds washes off the sins.

The architectural jewel of Jaipur, Birla Temple in Jaipur is widely known for featuring one of the best temples in Jaipur. However, the temple does not have any famous legendary facts to feature, the beautiful Laxmi Narayan Temple attracts tourists and pilgrims from all over the world. It was built by the famous Birla Family and accommodates the idols of Lord Vishnu and Goddess Laxmi.

Located in the complex of the City Palace, Govind Devji Temple has been one of the popular temples in Jaipur. The religious temple is dedicated to Lord Krishna, the temple enforces a swarm of people to attempt a spiritual journey. Besides its attractive marvellous architectural finesse, the temple beholds a great legendary fact.

The most popular Moti Dungri Temple is devoted to Lord Ganesha and is located at a distance of 6 kilometres from the city of Jaipur. It is regarded among the famous temples in Jaipur which is surrounded by a mountain range. The idol of Lord Ganesha present here is said to be 500 years old and was derived from Gujarat by Seth Jai Ram Pallival and Maharaja Madho Singh of Udaipur.

Another most famous temple to visit in Jaipur is the popular Akshardham Temple in Jaipur. The temple is dedicated to Lord Vishnu and is one of the major tourist attractions in Jaipur with its carving of stones and excellently detailed architecture. The temple walls are beautifully carved with many images of Lord Vishnu and Hindu Gods.

The temple is considered one of the most blessed and pure pilgrimage places by the Hindu devotees. All around the year, many devotees visit this specific temple of Jaipur to seek the blessings of Lord Shiva in its Lingam avatar. Besides the statue of Lord Shiva, the temple also has statues of Hanuman, Goddess Parvati, Nandi bull, etc.

The religious temple is yet another dedication to Lord Shiva and is one great masterpiece that should not be missed or skipped during the Jaipur Sightseeing Tour. The temple is surrounded by immense beautiful greenery and peaceful surroundings which will surely win your heart.

ISKCON Temple is one of the major temples and popular tourist attractions to visit in Jaipur. The holy shrine is made of white marble that catches the attention immediately. The peaceful and charming surroundings of the temple are one major interesting attraction of this place. The stunning architecture of the temple is truly mesmerising that will let you fall in love with the temple.

Each one of these temples has its religious significance and thus pulls many devotees and tourists to see on Jaipur Tour by car. The Pink City has endless attractions for tourists arriving here from all walks of life. Therefore, when it comes to the devotional side of this city, you will get innumerable options to explore. So, explore these temples in Jaipur on your Rajasthan tour plan.