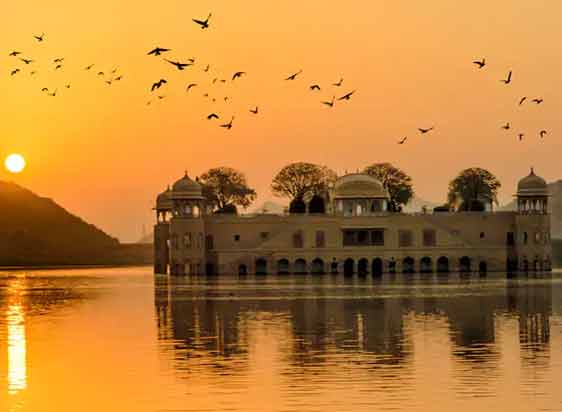 India’s famous heritage cities of Northern India, the Golden Triangle Tour, connect Delhi, Agra, and Jaipur. They are rightly called so, as they offer a vivacious experience to explorers who want to explore India in its purest way. The country is an intense confluence of many cultures, terrains, cuisines, and architecture, making it one of the most intriguing places in the city. Witness the confluence of terrains, cuisines, languages, and architecture in the cities.

7 Must-visit places to visit on the Golden Triangle tour -

The triangle cities of the northern region make up the route - Delhi, Agra, and Jaipur. These places are set at a distance of around 200 to 250 kilometers from each other. These are loaded with history, culture, and heritage. So, let’s see what are the major highlights of this tour -

Delhi - the first stoppage of the tour

When planning the Golden Triangle Tour of India, Delhi is the first place ready to welcome visitors. It takes travellers to unveil the past of the Mughal era and the Delhi Sultanate. There’s everything from shopping places to delicious cuisines and monuments to discover in the Delhi sightseeing tour.

Qutub Minar stands tall in the country and is considered being another World Heritage Site that you must explore on the Golden triangle tour.

Jama Masjid is a popular mosque that hosts thousands of pilgrims each year on the holy occasions of the EID festival. It is the largest mosque in India built by Mughal Emperor Shah Jahan.

Red Fort was built in 1638 by Mughal Emperor Shah Jahan, as his ruling kingdom. This is a popular UNESCO World Heritage Site in Delhi. The fortress was the ruling place of many Mughal emperors for almost 200 years.

The second most popular travel destination on this tour, which has one of the popular Seven Wonders of the World. The popular Mughal architectural wonder of this tour, Agra is popularly known for its “Symbol of Love”. Don’t miss tasting the “Agra ka Petha” which comes in various flavors.

Taj Mahal is the most charming splendor in daylight or at dusk, as the structures are known to change their hues in tune with the sun. The popular symbol of love is the Taj, which is a stunning World Heritage Site and is recognized as one of the Seven Wonders of the World. Capture the splendid views of the Taj Mahal in the early morning.

The last tourist attraction of the Golden Triangle 3 Days Tour circuit is known as the Pink City of Rajasthan. It is a majestic historic fort and monument offering a wonderful treat to travellers. It is the perfect place for those who want to enjoy sightseeing, photography, and entertainment. The city is a beautiful symbol of royal cultures, traditions, traditional delicacies, etc.

Hawa Mahal is a massive edifice at the intersection of the main road in Jaipur. It is the popular Palace of Winds deriving its name from the unique structure, which is a mesh of 953 small windows called Jharokhas. The main attraction of Jaipur, Hawa Mahal, was kept as the best place to go in the hot summer months.

Amber Fort lies on top of the Aravalli hills, which is one of the most magnificent places in India. This is the popular architectural jewel of the city, with its maze-like passages and serpentine staircases, in an architectural masterpiece with the essence of a glorious past.

City Palace is a popular attraction in the city. The royal palace of Jaipur is the perfect specimen of Rajasthani culture and art. It has occupied one-seventh of the walled city. City Palace is divided into a series of buildings, courtyards, and gardens including the Chandra Mahal and the Mubarak Mahal.

Best Places to Visit on the Golden Triangle tour -

Lotus Temple is among the famous tourist places in Delhi and a prominent landmark of India, attracting tourists from all over the world because of its architecture and beauty. The fine construction of the temple resembles the lotus flower created in white color. The temple is open to all people, despite region and caste.

Humayun’s Tomb or Maqbera e Humayun is a historical site in India that is the tomb of the famous Mughal emperor Humayun. The tomb was built by the first wife of Humayun, who was the chief consort as well, Empress Bega Begum from 1569 to 70. The architectural design of the tomb was born in the heart of Mirak Mirza Ghiyas.

India Gate is an important site to visit when on a tour of Delhi. It is the famous All India War Memorial built in order to remember the 82000 soldiers of the Indian army who lost their lives during the First World War. The war memorial is located at the Rajpath with an eternal flame built under the Memorial Archway called Amar Jawan Jyoti.

Agra Fort was one of the most important forts during the Mughal period and is one of the finest places to visit in Agra. Akbar lies on the banks of the Yamuna River and is also designated as a UNESCO World Heritage Site. Reveal the history of the bygone era. There are many structures located inside the fort, like Diwan-i-Khas, Diwan-i-Aam, etc.

Tomb of Itmad-ud-Daulah lies on the bank of the Yamuna River which is one of the best places to visit in Agra. The architecture and interior are known to be inspired by that of the Taj Mahal as it also has traces of white marble from Rajasthan in red sandstone architecture. Its resemblance gives it the name of “Baby Taj”.

Fatehpur Sikri is a renowned town in Agra, that once served as the capital of the Mughal empire. The town was built and established by Akbar which was later abandoned in 1610. One of the most important tourist attractions is Buland Darwaza. The surreal interiors of the town are a visual treat to the eyes which are sure to leave you spellbound.

Jal Mahal was built during the Rajput era when India has seen some of the glorious forts and palaces. Floating on the Man Sagar Lake, the royal palace shows a fusion of Mughal and Rajput styles of architecture. Built using red sandstone, Jal Mahal is a five-story building of which four remain underwater.

Jantar Mantar is a renowned UNESCO World Heritage Site in India, which is built by Maharaja Sawai Jai Singh, one of the best theorists of ancient India. It has around 19 instruments used for calculating time, date, and day with the help of the sun’s position. The observatory is widely famous for being the largest sundial in the world.

Albert Hall Museum was built to remember the visit of the prince of Wales. It is the most popular state museum of Rajasthan, displaying the historical products of local artists and artisans. The museum is also home to one of the six Egyptian Mummies in India which was gifted as a souvenir by the Brugsch Bey of the Museum of Cairo.

Discover the famous destinations of Delhi Agra Jaipur, but this is in no way a comprehensive list. Instead, there are several places that you can add to this depending on your Golden Triangle Tour itinerary and the time of your journey.