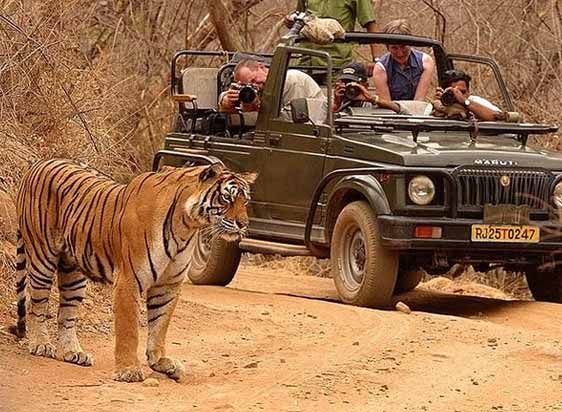 Rajasthan’s most popular wildlife getaway package is the Jaipur Ranthambore Day Tour which is the favorite one of travellers. One of the country’s famous wildlife reserves in Rajasthan, Ranthambore, was dominated by the 10th-century fortress of Ranthambore. There are the valleys with numerous cenotaphs, ruins, and abandoned settlements overcome by nature – a testament to battles and romances of a very long era. Our Jaipur to Ranthambore Tour package is a perfect way to escape into the wilderness for just a day with your dear ones.

Meet the representative at the pickup point –

Begin Jaipur Ranthambore Day Tour by getting picked up from your hotel or predefined location in Jaipur to leave for Ranthambore. As you sit in the car, you will feel the excitement that will grip your mind and heart as you start an amazing tour with your drive to Ranthambore. Soon after, you will find yourself surrounded by agricultural and industrial countryside colorfully dressed people, and some interesting monuments.

Located in the Sawai Madhopur district of Rajasthan, Ranthambore was once the hunting grounds of former kings of Jaipur and nearby destinations. It is one of the best tiger reserves in the country, known for its huge tiger population which increases the chances of sightseeing in the wildlife reserve. Along with this, Ranthambore is enriched with flora and fauna species, making it absolutely a must-visit place.

Sprawling 392 sq km of area, the Ranthambore National Park is one of the largest and most famous tiger reserves in the country. It is widely famous for the magnificent Royal Bengal Tigers found there. The tiger reserve derives its name from the Ranthambore fort located in the region. It forms a part of Project Tiger reserves by the Government of India, set up in 1955. Ancient religious ruins within the forests surround the rich biodiversity and aesthetically crumbling cenotaphs make it a favorite spot for photographers, wildlife enthusiasts, and travellers.

Besides the tiger, other massive cats of the Ranthambore National Park are Leopard Cats, Desert Cats, Caracal, Fishing cats Jungle cats, etc. The park is home to these countless enormous cats, yet the tigers are the masters of the region and rule the area with utmost satisfaction.

Winter season is best to enjoy the exciting tiger safaris in Ranthambore national park. This is the best time when you can enjoy the thrilling safari in the national park. The park remains closed in the Monsoon season (the first of July to the 30th of September).